In these days of electronics advancing at incredible speeds it is easy to forget that many of the things we take for granted are founded on the tremendous mechanical engineering advances of the past.

There are many examples of excellent mechanical engineering in our history, see my post Everything We know So Far on One Sheet of Paper .

The development of the steam engine is a great example, from Newcomen’s pump engine, James Watt’s improvement to it after he was sent one for repair, Trevithick’s high pressure steam engine leading to Stephenson’s Rocket, the first locomotive. This led to the construction of railways, the shortening of distance led to the need to have universal time across an entire country.

So there are links to watch and clockmaking, possibly the most intricate of miniature mechanical engineering. My father was a watch maker by trade and a member of the Royal Institute of Horologists. As a small child I used to sit with him while he worked, cautious against jogging the bench or sneezing least I knocked one of the tiniest gears or screws onto the floor. Whilst we couldn’t necessarily repair one we can all understand that a watch or clock is driven by a spring, that something governs the speed at which the springs power is delivered and that through a sequence of gear ratios the hands turn to denote the hours, minutes and seconds.

The thing is, unlike electronic or software engineering where the design is unseen and only the product is visible to the user for the most part mechanical engineering artefacts are visible.

Most of us have an appreciation of what happens in an internal combustion engine, so we have an idea of what is going on in our car as we drive, we understand how the steering works, how the brakes work, how the friction of the tyres with the road allows us to accelerate, corner and brake.

If we get in a boat we know that an engine turns a propellor and that this pushes the boat forwards, by turning a rudder at the back we control direction, it’s almost intuitive. When we get on an airliner we may not know precisely how a jet engine works but we have an appreciation, even if it is limited, of the fact that it develops thrust that pushes the aircraft forward. We can understand how the control surfaces work, ailerons, elevators and rudder and we can easily understand the concept of lift.

Da Vinci and the Helicopter

But what about the helicopter, we know that a rotor spins up to make it rise and that a fan is required on the tail to keep it straight and steer it left and right. The earliest concept of a helicopter is credited to Da Vinci, but it is debatable that he ever made even a model fly. 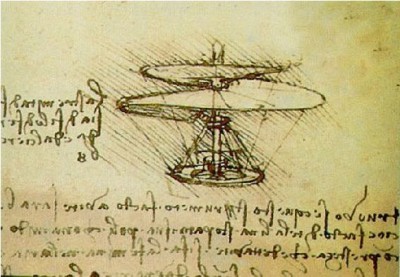 In the history of aviation a lot has been tried and tested by building and flying models.

If you have ever bought one of the cheaper toy helicopters you will see that they are very different to their full size counter parts. The first difference is that they have two sets of rotors above one another and second that the tail fan is mounted flat rather than vertically.

The dual rotors actually contra-rotate so that the tendency for the body to spin can be neutralised and since they are controlled by separate motors by changing their relative speed the body can be turned in any direction required. To make these helicopters more forward the flat tail fan gives lift to the tail, tilting the body forward converting some of the lift from the main rotors into a forward vector. By reversing the tail motor it pushes the tail down giving reverse travel. If you have played with one of these you will know that it simply doesn’t act like a real helicopter and they only work well in still air indoors. There are real helicopters that use coaxial rotors like this but they are mechanically very complex.

Most helicopters use a flybar and collective pitch mixing method developed by Bell and Hillier. If you have ever looked at the main rotor on a helicopter your will see its quite complex, lots of linkages and joints.  For me here’s the thing, it’s almost impossible to figure out by looking at the exposed mechanics how it actually works. When the helicopter is in operation all of this complex mechanical engineering is whirring round with the rotor blades in a blur. Sure people have produced slow motion footage but its still not easy to see and yes there is lots of theory you can read up on if you want to.

Radio controlled model helicopters have developed massively over the years, the advent of powerful batteries and brushless electric motors together with miniature stabilisation gyros has caused an explosion in their popularity. They are still difficult to fly and costly to repair if flying mistakes are made but they do use the complex mechanical mixing that is so hard to visualise. There are other complexities such as 90 degree phasing and gyroscopic precession but if you are curious, go and find out about these things. For instance do you know that there is a maximum theoretical forward speed that is immutable? Again if you are curious go and research.

I discovered the following videos on YouTube where Yodosha from Hungary has produced a CAE simulation of the main rotor linkages which he has then go on to animate, I think it gives an incredible insight and appreciation as to what is going on with the changes in cyclic pitch made possible by the mechanics of the swash plate. Yodosha has other excellent simulations on his channel too, why not take a look?

One response to “Be curious, tenacious, informed and collaborative”

Many consultancies only help you discover the wrong answers, Inflexion Point Consulting helps you to find the right ones!